How To Remove PFOA And PFOS From Your Water

“PFAS are a group of man-made chemicals that includes PFOA, PFOS and many other chemicals. PFAS have been manufactured and used in a variety of industries around the globe, including in the United States since the 1940s. PFOA and PFOS have been the most extensively produced and studied of these chemicals. Both chemicals are very persistent in the environment and in the human body – meaning they don’t break down and they can accumulate over time. There is evidence that exposure to PFAS can lead to adverse human health effects.”

These Volatile Organic Compounds have been used to make carpets, clothing, fabric for furniture and paper packaging for food products. Exposure to these chemicals is typically localized, in communities near firefighting training facilities and manufacturing facilities.

How to remove or reduce these harmful chemicals:

According to the American Water Works Association, three technologies are highly effective in the removal of these Volatile Organic Compounds. These include Activated Carbon, Anion Exchange and Reverse Osmosis. Let’s examine each more closely.

Carbon is a substance that has a long history of being used to adsorb impurities and is perhaps the most powerful absorbent known to man. One pound of carbon contains a surface area of roughly 125 acres and can adsorb literally thousands of different chemicals. Activated carbon is carbon which has a slight electro-positive charge added to it, making it even more attractive to chemicals and impurities.

There are two principal mechanisms by which activated carbon removes contaminants from water; adsorption, and catalytic reduction, a process involving the attraction of negatively-charged contaminant ions to the positively-charged activated carbon. Organic compounds are removed by adsorption and residual disinfectants such as chlorine and chloramines are removed by catalytic reduction. surface, the negative ions of the contaminants are drawn to the surface of the carbon granules.

Activated carbon filters remove/reduce many volatile organic chemicals (VOC), pesticides and herbicides, as well as chlorine, benzene, tri-halo-methane (THM) compounds, radon, solvents and hundreds of other man-made chemicals found in tap water. Some activated carbon filters are moderately effective at removing some, but not all, heavy metals. In addition, densely compacted carbon block filters mechanically remove particles down to 0.5 micron, including Giardia and Cryptosporidium, turbidity and particulates. Although some iron, manganese, and hydrogen sulfide will be removed by these higher quality activated carbon filters, a manganese dioxide iron reduction filter is generally preferred to remove these contaminants as the effectiveness of carbon filter against iron and manganese is generally short-lived if the contaminant concentration is high.

Refer to the chart, below, for removal effectiveness and relative performance data. 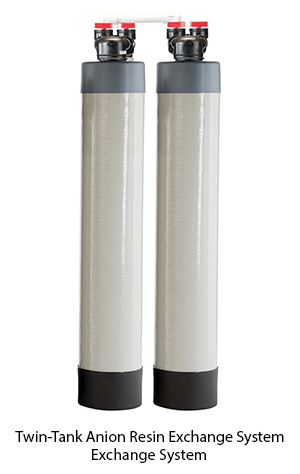 Anion Exchange is an exchange of ions between two electrolytes or between an electrolyte solution and a complex. In most cases the term is used to denote the processes of purification, separation, and decontamination of aqueous and other ion-containing solutions.
Most Anion Exchange systems utilize tanks of Anion exchange resin that are installed in series.
During the filtration process, water flows through the resin tank until the resin is considered exhausted. This happens when water leaving the exchanger contains more than the desired maximal concentration of the ions being removed. With this design, resin is not regenerated using a brine solution, which is common with water softeners. Moreover, no flushing is required, and there is no need to deal with waste water.
Treatment with this method is a single pass-through each filter tank. For this reason there is no need for resin regeneration, and resin disposal is accomplished by incineration. 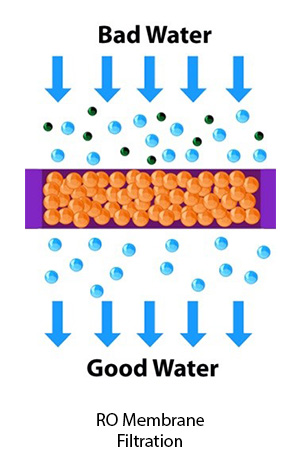 Reverse osmosis (RO) is a water purification technology that uses a semipermeable membrane to remove ions, molecules and larger particles from drinking water. In reverse osmosis, an applied pressure is used to overcome osmotic pressure, so unwanted matter is removed.
Reverse osmosis can remove many types of dissolved and suspended species from water, including bacteria, and is used in both industrial processes and the production of potable water. The result is that the solute is retained on the pressurized side of the membrane and the pure water is allowed to pass to the “good water” side. To be “selective”, this membrane should not allow large molecules or ions through the pores, but should allow smaller components of the solution to pass freely.

Applying an external pressure to reverse the natural flow of a pure solvent, thus, is reverse osmosis. The process is similar to other membrane technology applications. However, key differences are found between reverse osmosis and filtration. The predominant removal mechanism in membrane filtration is straining, or size exclusion, so the process can theoretically achieve perfect efficiency regardless of parameters such as the solution’s pressure and concentration. Reverse osmosis also involves diffusion, making the process dependent on pressure, flow rate, and other conditions. Reverse osmosis is most commonly known for its use in drinking water purification from seawater, removing the salt and other effluent materials from the water molecules.

The Reverse Osmosis technology is highly effective.  However, the process is very slow.  This is why a storage tank is always required.  For whole house treatment, a 400 to 750 gallon storage tank may be required, depending on water use per day.

In addition to the system and storage tank pre-filtration, water softening (if needed) and a delivery pump is required. 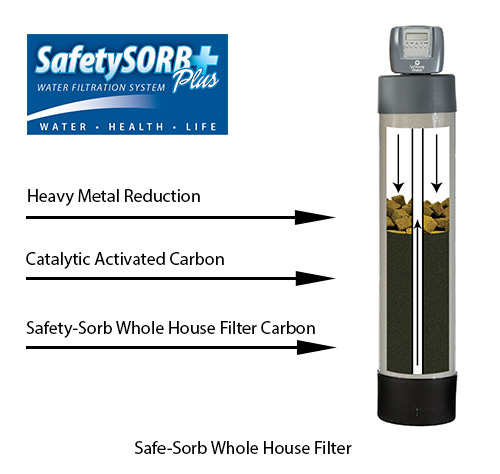 Our Safety-Sorb Plus systems provide three step filtration to remove or reduce highly toxic Volatile Organic Compounds, along with Chlorine taste and odors.

Water enters the filter at the top and flows down through activated carbon and other filter media, described below:

During step #1, heavy metals are removed / reduced and pre-filtration is provided.

During step #2, water is filtered by a premium grade of Catalytic Coconut Shell Activated Carbon for chemical removal.

During step #3, final filtration is provided using Super Structured Activated Carbon which has been treated to accelerate the filtration process and enhance performance.

With all activated carbon filters, contact time is essential, and proper sizing is essential.

If you think this article was useful please share with your friends.